The following article by Victoria Stevens appears in the 2017 Jesus College Record.

During the many years that I have worked on the conservation of Oxford library collections there have been several objects that stand out in my memory as being especially remarkable. T.E. Lawrence’s undergraduate thesis is the foremost of this select group, and it is certainly the object with which I have spent the most time. It has just kept on popping up. Having conserved the original binding and text block through the Oxford Conservation Consortium in 2009–10, the thesis and I set off on a short tour of northern Europe, with me acting as courier for its safe installation in a two-centre exhibition on Lawrence in Germany during 2010 and 2011. A second courier trip for an exhibition at Magdalen College, and ongoing advice regarding its storage environment, cemented my working relationship with the thesis. It seemed like a fitting tribute to a ten-year friendship that I should be asked to contribute to the creation of a facsimile of this tactile but fragile object. 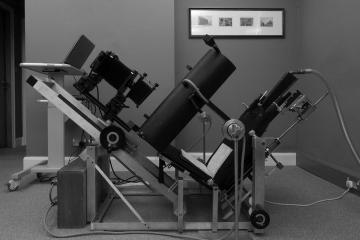 This fragility had long been recognised, and a digital copy of the thesis was created in February 2010 by Colin Dunn of Scriptura on large-format photographic equipment. Although perfect for research and online content, this cannot give the reader experience of thumbing through the original. In consultation with College Librarian Owen McKnight, it was decided that the facsimile should provide the same layered and dynamic impression that made the original so charming.

Lawrence had stuck and hinged into the thesis photographs, drawings, and outline plans, sometimes directly onto the pages and sometimes on roughly scissor-cut stub guards that were part of the textblock’s construction. The cheap and basic construction of the original binding was also part of the story: it was an undergraduate thesis rather than a fine binding, and we felt that this should be replicated as far as possible.

Printing of the textblock by Colin was preceded by decisions both practical and technical. A suitably thin stock was sourced through specialist paper suppliers R.K. Burt & Company. The digital images were prepared for print, and tests were run to ensure a very close colour match to the original. The differences in the spectral properties of the materials of the original and the facsimile meant that a change of light source could result in the copy appearing markedly different from the original; for this reason, the lighting conditions in the Fellows’ Library were used to establish the match.

Once the facsimile textblock was printed, the first stage in the binding process was to attach the stub guards both to create sections for sewing through and to provide compensation for the extra material that would be hinged in to mirror the original. This extra width has the advantage of enabling the wonderful marginalia to be seen without having to force the binding.

The guards were pasted onto the verso of the facsimile pages with an overlap of no more than 2 mm, matching the chain lines and colour (the tone of the paper in the original pages varies considerably).

The facsimile textblock: after making into sections (photo: Victoria Stevens)

After folding the guards and making up the sections, the next stage was to sew the textblock. Thin linen tapes were used for the sewing supports, to replicate the original sewing structure and give greater strength and flexibility.

Departing from the original thesis binding structure, the boards were laced on to increase the strength of the binding attachment and help the finished facsimile withstand the handling it was likely to receive. This involved driving an awl at two points through the depth of the board for each support, fraying out the ends of the sewing supports, known as slips, and lacing these through the boards. The slips are fixed both mechanically – the board around the awl puncture is hammered down into place like a rivet – and by adhesion, applying paste to the slips before they are laced on.

The spine was lined with a linen textile to provide support to the sewing structure and add strength. As old starch-filled cloth stock was to be used to replicate the original look and texture of the cloth case, it was important to increase the fold resistance of the covering cloth through this sturdier linen layer. The linen liner was extended onto the outer face of the board, and the laced-in slips and liner were covered with a thin card to provide a smooth surface finish. As cloth was being used as a covering material, a hollow was made off the book and attached to the spine with paste. The binding ready for covering can be seen in the image below.

Beneath the cloth: the in-boards textblock waiting to be covered. (photo: Victoria Stevens)

Covering using old cloth stock is a nerve-wracking business. Modern bookcloths often have a coating that prevents staining to the outer surface through adhesive or accidental contact with damp fingertips, an event not unknown when one uses an aqueous adhesive such as paste. Such convenience was sacrificed for appearance when the cloth was chosen for the facsimile, as a modern cloth would have looked very much at odds with what I was hoping to achieve in terms of close fidelity to the original binding. 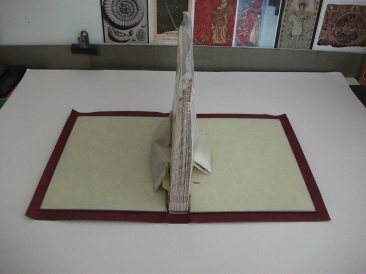 Stage one of the covering: the cloth is adhered to the spine and the boards and is ready to be turned in, head and tail first and then fore-edge. (photo: Victoria Stevens)

The last stage of covering was pasting down the endleaves. The inner faces of the boards were infilled with thin conservation-grade card up to the depth of the covering cloth to provide a smooth finish to the faithfully reproduced pastedowns, complete with printed bookplate and original adhesive browning to the flyleaves.

The final task was to reattach the loose items, which are so important to the character of the original thesis and the impact of the facsimile copy. The inserts were reproduced identically from the digital image, painstakingly cut out exactly to shape by Colin, and hinged into the textblock in the same position as in the original either by tipping onto the guards or by attaching them to the pages with small tabs of strong but thin Japanese paper pasted onto the verso of the insert. This hinging allows them to be lifted to reveal the text below and creates the same movement in the facsimile textblock as in the thesis.

The bound and complete facsimile copy was provided with a drop-spine cloth-covered box made by Bridget Mitchell of Arca Preservation, constructed to grip the fore-edge of the book to prevent any changes in the board profile due to possible variations in environmental conditions while in storage.

The end result is an attractive, functional and faithful reproduction, with a textblock which looks and feels almost identical to the original, and a binding that bears more than a passing resemblance to it. As a handling copy, it maintains all the hand-made and tactile qualities that make Lawrence’s thesis so interesting and delightful to read.

Victoria Stevens ACR has worked as a library and archive conservator for almost 20 years, mainly in the central library and college collections of the University of Oxford. She now manages a conservation practice and preservation consultancy from her studio in Reading, with a customer base across the UK.

Like Loading...
This entry was posted in Jesus College Record, Manuscripts and tagged T.E. Lawrence. Bookmark the permalink.